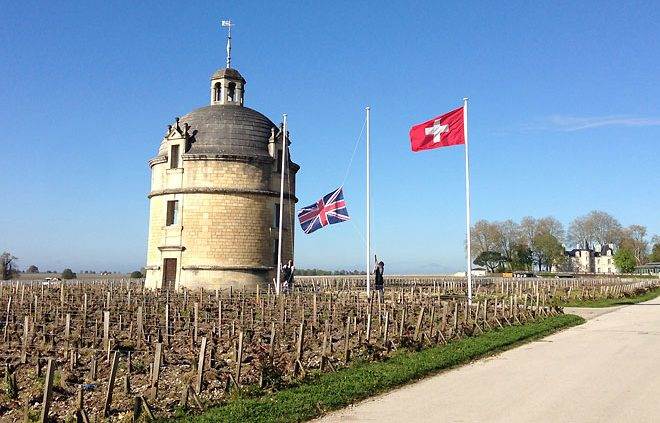 Between now and the end of June, all the new releases from Bordeaux’s 2016 vintage will be released en primeur by the chateaux.
If you would like to receive our Bordeaux 2016 en primeur offers please simply send me an email with your contact details, and we will send you offers of our favourite wines once the prices are released.
Having tasted over 200 different Bordeaux 2016 wines out of barrel in early April, most on 2 or 3 occasions, I have no doubt that this is an excellent vintage offering delicious wines at all price points. You can read my full assessment of the vintage below, and see my favourite wines by price category at the end of my report. 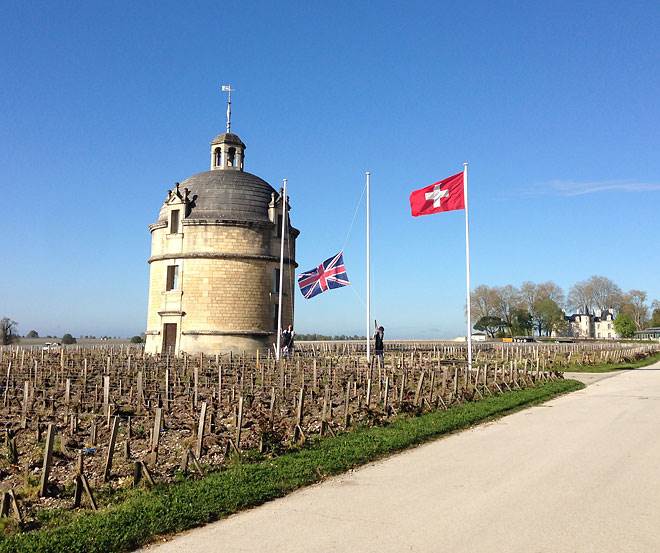 The flags go up at Chateau Latour as we arrive to taste their wines!

Bordeaux 2016 – Another “vintage of the century?

Since the beginning of this century, Bordeaux has produced a remarkable number of excellent vintages (2000, 2005, 2009, 2010 and 2015), each one in turn described by various members of the Bordeaux Trade and press as the best vintage of the century!

The weather in 2016 and its effects on grape quality

Wine journalists and professionals love to talk at length about the weather during each vintage! I know this can be a little boring, but it is precisely these varying weather conditions which makes Bordeaux’s wines so different from one vintage to the next, and ultimately so interesting to wine drinkers and collectors.

The weather in 2016 quite simply turned out to be near-perfect for the quality of Bordeaux’s red wines and for the final quantities produced, which were considerably higher than in any vintage since 2006.

The first half of the year until mid June was extremely wet, except for a few days in early June when the rain conveniently stopped, allowing a healthy flowering to occur. July and August were very warm, dry and sunny, providing perfect ripening conditions for the grapes.

Some light rain in early September provided relief to the region’s vines at the perfect moment, just when many were starting to suffer from thirst. This gave them the sustenance they needed to continue ripening gradually and perfectly until harvest during the sunny and mild early Autumn days between mid September and the end of October. The longer into October the grapes are able to ripen on the vine, the cooler the nights become and the more freshness, elegance and purity of flavour the resulting wines develop. This freshness, combined with rich yet perfectly ripe fruit and tannins, are the hallmarks of Bordeaux’s 2016 red wines. According to Louis Mitjaville of Tertre Roteboeuf, “since 2000 we now have a new style of vintage, where the grapes ripen during a warm Summer (July and August), then are picked in a late, sunny Autumn”. It is precisely these conditions which are responsible for the high quality of the 2016 harvest. It would appear that – so far this century – global warming is having a genuinely positive effect on Bordeaux’s wine quality!

2016 is without doubt a very good and often “great” year for Bordeaux’s red wines. The best performing regions were quite clearly in the Northern Medoc – St Estephe, Pauillac and St Julien – where the clay subsoils preserved enough water from the early season rain to provide sufficient sustenance to the vines during the hot, dry Summer months. The wines here are fresh and have moderate alcohol levels between 13-13.5% – around 1% alcohol lower than in 2015. The tannins are very firm – promising a long life ahead – but perfectly balanced by ripe, juicy and powerful fruit flavours. Chateaux at all price and quality levels have produced excellent wines. 2016 is specifically a very good vintage to buy second wines from well known chateaux – which generally offer excellent value in comparison with their “grand vins” – and Crus Bourgeois and Petits Chateaux from the Northern Medoc.

The Margaux appellation also produced some excellent reds, with finesse, purity and elegance, although quality in this large appellation was a little more variable on the whole, and rarely reached the peaks achieved in 2015. Chateau Palmer just pipped Chateau Margaux for me as the star of the appellation this year, with very fine wines also produced in Chateaux Malescot St Exupery, Rauzan Segla and Brane Cantenac.

On the right bank, where Merlot dominates the blend, the best wines came from vineyards with a high clay content in their soils, and specifically with a high percentage of later-ripening Cabernet Franc vines on those clay soils. Chateau Canon was a perfect example of this, with its high proportion (30%) of Cabernet Franc giving wonderful elegance and freshness. 2016 was most definitely “a clay year” according to most winemakers. Those producers who took the most care to pick only perfectly ripe grapes, and who vinified their grapes very gently, with minimum extraction of tannins from the skins, produced exceptional wines; Vieux Chateau Certan and La Conseillante are prime examples. But these will come at a high price. On the whole, quality was more variable than in the Medoc; alcohol levels were around 1% higher than on the Left Bank and tannin levels seemed excessively high on several occasions.

This was a good white wine vintage, with very appealing tropical fruit flavours and a full, waxy mouthfeel, but acidities are generally a little low and some of the wines lack freshness and vitality. Similarly in Sauternes, the sweet wines have the most deliciously exotic fruit flavours, but there is not enough acidity to give them long ageing potential – wines which will give great pleasure in their youth. It is a “good Sauternes vintage, but not great” according to Sandrine Garbay, Maître de Chai at Chateau d’Yquem.

The 2016 vintage in comparison with previous vintages

It is always an interesting exercise trying to compare Bordeaux’s newest vintage with previous vintages – and always a difficult one! For me, there are distinct similarities between 2016 and 2010, both being vintages which expressed Bordeaux’s different terroirs very clearly. In 2016 you can taste very clearly the “iron fist” of Chateau Latour; the cigar box and cedary complexity of Lafite; the plush, velvety richness of Mouton Rothschild. The perfumed, violet-scented elegance, so typical in fine Margaux wines, contrasts quite distinctly with the restrained tannic power and ripe, dark fruit of most Pauillacs, and the finesse and precision of the best wines of St Estephe. But the tannins in 2016 are in general less obtrusive than those in 2010,possibly more similar to 2005, making it a vintage which should be approachable a little younger, yet nevertheless with long ageing potential. On the whole I prefer 2016 to 2015. It has more freshness and less alcoholic power, more finesse and expresses individual chateaux’s personalities more clearly. What is certain is that this is a vintage which deserves to be compared with Bordeaux’s finest.

1. A gradual move away from creating wines which appeal to Robert Parker

Robert Parker was the single member of the world’s wine press whose wine ratings were important enough to impact a Bordeaux wine’s selling price and potential saleability. Now he has stepped back from assessing Bordeaux’s wines for his much-respected Wine Advocate, and the British wine writer Neal Martin, who has a more subtle, classical taste, is responsible for assessing the region’s wines. This seems to be causing a gradual shift in style over the past few years. In 2010 wineries were making more extracted, concentrated wines to appeal to Robert Parker. Now they are moving towards making wines with more freshness and less extraction, less obvious oak and more harmony. The focus now is on individual terroir expression; too much fruit and oak mask terroir.

2. The continuing move to organics and biodynamics

Chateau Pontet Canet has been 100% biodynamic since 2005 and was certified biodynamic in 2010. They were the first major Bordeaux chateau to convert to biodynamic viticulture, and it has brought them enormous success – the average release price of their wines has approximately doubled in the mean time! More and more big name chateaux are now following this same route; Palmer is now 100% biodynamic and apparently there is an (unpublicised) drive for every chateau in Margaux AC to do the same by 2023; a significant % of Pichon Lalande’s vineyards are now biodynamic and 100% of Latour’s are organic. The conversion to biodynamic viticulture comes at a cost though. Chateau Palmer for example lost a large amount of their crop to mildew in the wet month of June – with very low yields of only 29hl/ha in their “Grand Vin” as a result. 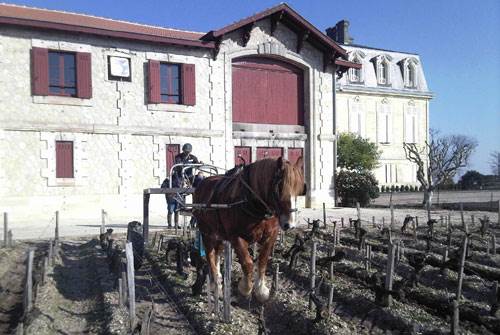 Conclusion: should you buy this vintage en primeur?

Based on wine quality alone, then I would definitely recommend you buy several 2016s. This vintage has produced many delicious, personality-packed wines at all price levels which are unique in style and different to any previous Bordeaux vintage. The best have excellent ageing potential but, because of their beautifully-integrated tannins, can be enjoyed from a fairly young age.

However, prices for the Classified Growths of the Medoc and the big names from the Right Bank in 2016 are likely to be at least 10-15% higher than the already-expensive 2015s, possibly significantly more. There are ominous similarities here with what happened to en primeur prices in 2009 and 2010. Be aware that the world’s wine merchants and private wine cellars are still awash with stock of the big-name chateaux from 2010, and many of these wines today are still worth less than the exceptionally greedy release prices buyers were required to pay “en primeur”.

So in conclusion, it is wise as ever to consider each wine’s release price carefully, and buy en primeur only for the following reasons:


My top tips – the wines which performed best this vintage