Explore more in our shop

We passionately believe that old vines produce some of the most exciting , personality-packed and truly individual wines in the world; wines which are the embodiment of their unique terroir!

One of the most wonderful sights for any wine afficionado is that of an ancient, gnarled, thick-trunked, grape vine which has clearly been rooted in its terroir for decades. To withstand a combination of strong winds, heavy rain, extreme heat and dryness over many years takes real “plant” strength, character and individuality – and these same qualities can be tasted in the resulting wine!

Old vines can be found all over the world, but they play a particularly important role in warmer, drier wine regions, where water is often scarce and so deep roots which can syphon out every drop of moisture from deep below the surface are hugely important to a vine’s survival. The world’s oldest vineyards still in production can be found in Greece and Slovenia, where one is claimed to have vines over 400 years old! Generally however, most wine makers describe “old” as being over 35 years of age. The Barossa region of South Australia has taken these definitions one step further in the last few years, producing a formal “Old Vine Charter”, which defines vines over 35 years of age as “old”, over 70 years as “survivors”, over 100 years as “centurions” and over 125 years as “ancestors”. These seem excellent definitions, and they will hopefully become more widely adopted by the rest of the world’s wine industry.

Try this selection of 6 of our favourite old vine wines to find out for yourself what makes this style of wine so special. 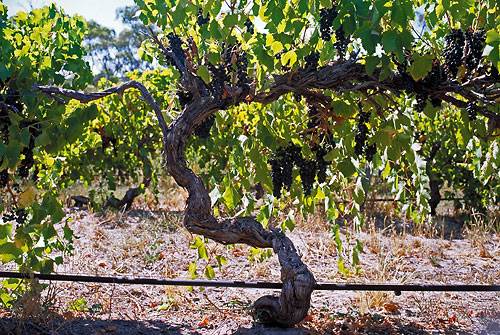 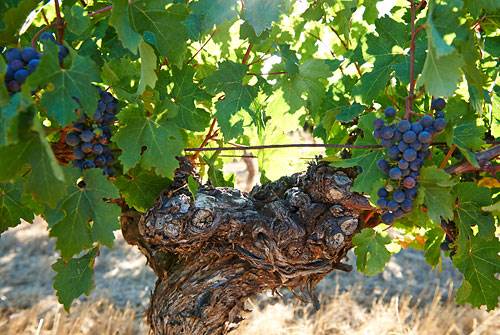 So what is special about wines from old vines?

As a vine gets older it produces less grapes, and those it does produce tend to be smaller. This means that there is a higher concentration of grape sugars and minerals in each grape, and more juice to skin contact. Thus old vine wines have an extra level of concentration, fruit intensity and structure than wines from younger vines. They have more depth and density of flavour, and they often have a spicy character, particularly old vine Grenache or Syrah.
The roots of an old vine dig far deeper than those of younger vines. This means they are able to extract more minerals from the soil deep below, and their wines tend to have an extra sense of “minerality” and precision . Thus old vine wines provide a vivid expression of the vine’s terroir, tasting more of the place than of the specific grape they were grown from.
As vines age they learn to adapt to their landscape and climate, producing the optimum amount of fruit per vine according to the conditions of each year; everything is in perfect balance in the vineyard, and this effortless balance is translated into the wines in the form of silky smooth tannins and a freshness of acidity, even in the hottest of growing regions.

Old vines are sadly however very rare in today’s wine world. Their low yields make them far less economical than younger vines, so usually vines are replaced every 20-25 years. Consumer tastes change fairly regularly, and as people demand different grapes and wine styles, those vines with grape varietals which are going out of fashion get replaced by new, trendier grape varietals. The biggest single destroyer of the world’s old vine population was phylloxera, a vine disease which devastated most of the world’s vineyards during the late 19th century. As a result, vines in all infected areas were dug up and replaced with vines which were grafted onto phylloxera-resistant American rootstocks. You can still find pre-phylloxera vines however in a few isolated wine regions of the world such as Chile, The Barossa Valley in South Australia, some parts of Sonoma in California and Franschhoek in South Africa; or on the sandy soils one finds in the Mediterranean Islands or other seaside vineyard regions such as Colares outside Lisbon in Portugal.
In short, old vines can produce truly great and memorable wines, with an inner strength, structure and freshness which you simply can’t find from younger vines. They are definitely worth seeking out and paying a little extra for!