Last March I found myself in London at the same time as Pasquale Petrera of the Puglian estate
Fatalone. He was there to present a flight of Primitivo going all the way back to their first official
bottling of 1988, with two even older vintages, bottled for family use only, 1981 and 1977. From
the start of the presentation, organised by Doug Wregg of UK importer Les Caves de Pyrène, it
was clear that Petrera was on a mission: to show that Primitivo (the variety known as Zinfandel
in California) can age. In his case more than 30 years. ‘We want to show how Primitivo
performs’, Petrera exclaimed, ‘and I’m very much against the idea that it needs to be drunk
within five years’.

That Primitivo has the capacity not just to survive in bottle but gain in complexity is not a given.
Most exported examples are full-throttle, fruit-driven, ready-to-drink wines with quite a bit of
alcohol. Most of it comes at very convenient prices simply because there is so much of the stuff.
Italy’s plantings of Primitivo total 12,000 ha (3,000 acres) at the last count in 2010. The
abundance of vines producing the raw material for a huge number of bargain bottles makes it
hard for producers to invest in higher quality, which also obscures the fact that Primitivo is much nobler than its low-cost reputation would have you believe.

Primitivo has been planted all over Puglia, but historic documents from the eighteenth century
plants it firmly in Gioia del Colle, a series of rolling hills south of Bari. It comes originally from
across the Adriatic (see The politics of Zin). Fatalone’s history begins at the end of the
nineteenth century when Petrera’s great-grandfather, Nicola Petrera, decided to plant Primitivo
in the highest, windiest parts of the Gioia del Colle in the contrada of Gaudella. With thirty
bottled vintages behind them, the fifth generation now running the estate has transformed it
into a reference point not only for long-lived, complex Primitivo but also for organic viticulture.
Fatalone is one of the first Italian estates to be carbon-neutral, with all the energy they need
supplied by solar panels.

While Puglia is readily associated with a very warm, southern climate, Fatalone’s vineyards are
on the highest point of the Gioia del Colle hills at almost 400 m (1,310 ft) and about 50 km (30
miles) from the coast. ‘Between our hill top and the sea there is nothing higher and hence the
coastal breezes have a mitigating influence on temperature’, Petrera explained. ‘The vineyard
soil, high in limestone and with a portion of water-retaining clay, results in the wine’s elegance,
and [provides evidence] against the idea that southern Italian wines are fruit bombs. Primitivo is
very sensitive because of its thin skin. This is the key for all the decisions we make, either in
vineyard or cellar.

Primitivo has a tendency to pass quickly from perfectly ripe to overripe. This is why the last
grapes they pick have always dried naturally on the vine. But this is in no way undesirable
according to Petrera. If not more than 20–30% of them are added to the fermentation tank, then
the result is not a stewed character but Primitivo’s most essential aroma, that of toasted
almond. ‘You notice a long, bitter taste on the palate long after you have swallowed the wine.
This is a typical characteristic of Primitivo from Gioia del Colle’, averred Petrera, who claims that
truly overripe fruit doesn’t display the almond character, just stewed fruit.

Primitivo’s other peculiarity is that its secondary buds are fertile. The bunches that grow from
these buds are not cut off, as is normally the case, but left on the vine. Petrera called these
bunches ‘key fruit’, because once the main bunches are perfectly ripe, the vines will no longer
transport nutrition and water to these bunches, but to the secondary fruit, which become the
raw material for a more-than-decent rosato. ‘They [the secondary crop] are a certain control on
the main crop, and we preserve acidity’, Petrera explained. At between 6 and 6.7 g/l, the natural
total acidity is exceptionally high for a red wine, not just one from the south, and brings out
Primitivo’s rarely seen vibrant side.

At the beginning of the flight of wines he presented, Petrera pointed out that during
fermentation they do not keep the wine for very long on the skins. With the alcohol easily
reaching 15%, the skins would completely dissolve, but the total maceration time is still a
remarkably long two to three weeks. He doesn’t believe in ageing the wine in new oak,
preferring used Slavonian casks of around 7 hl instead. ‘Oak will only smother Primitivo’s
delicate aromas’. The wines are fermented by indigenous yeasts and aged for only 12 months in
cask. Any longer would lead to premature oxidation of the wine, according to Petrera. But this
risk of premature oxidation is not inherent in the variety itself but is apparently the effect of too
much ‘music therapy’.

During those 12 months Petrera pampers his wines with ‘soft new age and classical music
enriched with sounds of nature (wind, rain, leaf movements, water flowing and chirping of
birds), based on the idea that these soft vibrations improve the activity of the microflora present
in the wine and support its breathing when in casks.’ (This is how Fatalone’s website describes
it.)

I know, I thought the same, but the idea is not as insane as it may sound at first. Petrera has
studied physics and has a keen interest in sound waves. He explained that the sound waves of
classical music are a kind of massage of the wines, in which the casks become a sort of
membrane and this massage magnifies the micro-oxygenation. This is the reason Petrera
doesn’t leave the wines any longer than 12 months in cask. He mentioned that to prove it he
once conducted an experiment with two casks of the same wine, one with and one without
music therapy, and they turned out differently. He did, however, admit that the difference could
not be explained by the presence or absence of music alone.

Whatever the effect of sound waves, the 16 wines below more than convinced me of the ageing
capacity of Primitivo as well as its complexity, provided it is in the right hands.

● Fatalone, Primitivo Riserva 2011 Gioia del Colle Brooding, sweet nose of carob and cherry
liqueur. The palate has real succulence to it and is a little vibrant with damson and fig on the
finish and bags of crunchy tannins. (WS)15% Drink 2016-2028
17+ 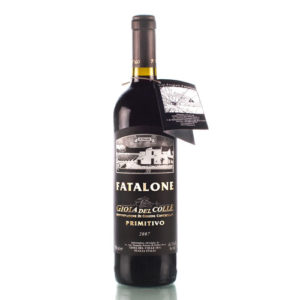 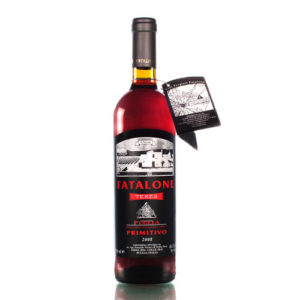