After the exceptional 2016 and ripe and powerful 2015 vintages, 2017 marks a return to a more “classic” style of Bordeaux. The best wines of this vintage have noticeable freshness and gentle, unobtrusive tannins. They have light to medium body and are lower in alcohol than recent “big” years such as 2009, 2010 and 2015, with typical alcohol levels of 13-13.5% on the left bank and 13.5-14.5% on the Right Bank. They have an attractive perfume of violets and the fruit tastes nicely ripe – in a juicy, “croquant”, purple berry-flavoured style. The style of the 2017 reds is really not the same as any single previous vintage – perhaps it reminds me most of a combination of the ripe fruit flavours of 2011, freshness of 2008 and classic structure of 2006.

In general 2017 wines lack the “wow” factor of 2016 and many 2015s, and quality is not as consistent across all appellations as it was in 2014; 2017 is certainly not a “great” Bordeaux vintage. There are several very good wines, particularly from the best chateaux of Pauillac, St Julien, Pessac Leognan and Pomerol. But there are also many disappointments, where the acidity appears too high and which lack body and fruit density on the mid palate; this is a year where it is important to choose carefully.

THE YEAR OF THE FROST

2017 in Bordeaux was “a precocious vintage”, with earlier budburst, flowering and picking dates than usual. Uncharacteristically warm and sunny weather early in the growing season lead to a very early bud-burst. This meant that the severe frost which hit Bordeaux on the 26th and 27th April caused severe damage in many areas. It was particularly destructive in St Emilion (on the vineyards lower down the limestone plateau), Entre Deux Mers, Pessac Léognan and Barsac, where several producers lost much or all of their 2017 crop – Chateaux Climens, Chantegrive and De Fonbel to name but a few.

Fortunately, those vineyards in the Medoc which were within sight of the river Gironde suffered no, or very little, frost damage, as the river warmed up the night time temperatures on these cold nights by a grape-saving 0.5-1C. Some vineyards further inland did however suffer from varying degrees of frost damage.

May and June were hot and dry -perfect for the flowering – whilst July and August were less warm, but continued dry.

The grapes for Bordeaux’s dry white wines were picked towards the end of August in ideal conditions. 2017 is a very good vintage for this style; the Sauvignon Blancs have fresh, vibrant acidity and pure, sometimes exotic fruit flavours, whilst the Semillon grapes add lovely richness, texture and complexity.

Heavy rain and cool, grey weather in the first 18 days of September meant that Merlot grapes on earlier-ripening terroirs did not achieve their optimum ripeness levels and had to be picked in less-than-ideal conditions. Be careful therefore this year of many Merlot-dominated St Emilions and wines from the Entre Deux Mers regions, several of which have rather high levels of malic acidity and lack mid palate weight.

These same rains however caused beneficial botrytis or “noble rot” in Sauternes, with the result that there are some deliciously rich, exotic and complex sweet wines this vintage.

A sunny and dry late September and October made it possible to pick very good quality Merlot from later-ripening sites and Cabernet Sauvignon grapes– hence this was a much more successful year for Cabernet Sauvignon and for the Northern Medoc in general.

Production volumes as a whole in Bordeaux 2017 were 33% lower than the 10 year average due to the frost, although the 3 famous appellations of the Northern Medoc – Pauillac, St Estèphe and St Julien -actually had a larger crop than any of the preceding 5 vintages!

The top wines of St.Julien were also very good, with fuller body and more “matière” (or weight) on the mid pallet, in particular the 3 Léovilles, Ducru Beaucaillou and Beychevelle.

The best St.Estephes showed marked elegance, freshness and restraint – Cos, Calon Segur and Montrose are particularly classic and serious this year.

The wines of the Margaux appellation had purity, freshness and a more vibrant red fruit character, but several lacked weight on the mid palate; Palmer and Rauzan Segla were my clear favourites from this region.

The reds of Pessac Léognan showed freshness and a little more weight and density than many in the Medoc, with a pleasant, ripe purple-fruit character.

This was not a good year on the whole for second and particularly third wines from the bigger Left Bank estates as some grapes which were damaged by the frost and therefore did not ripen properly may have ended up in these lesser blends. It was vital in this vintage to sort these unripe grapes from frost-affected vines and not to include these in the production of the chateaux’s grand vin. Smaller chateaux which were not able to do this severe sorting often produced wines with a marked attack of acidity as a result.

St.Emilion
The most variable of all appellations this vintage as it suffered more than most from the frost. There were a handful of excellent wines from the top of the limestone plateau – most notably Figeac and Tertre Roeboeuf – but tread very carefully in this appellation!

There are some very good wines, particularly from the best producers of the northern Medoc , Pomerol and Pessac Léognan. But you need to be selective – quality in 2017 is much more variable than in any of the past 3 vintages! Do your research – read different press reports, compare wine scores and ideally consult a trusted wine merchant.

And beware of high prices! Just as with the overpriced 2011 vintage on the back of the over-inflated 2009 and 2010 vintages, release prices are very likely not to come down enough to reflect the drop in quality between 2015/16 and 2017. As a rough guide, they should be priced at around the same level as the 2014s were released – plus an extra 10% to reflect the weakened buying power of the Swiss Franc against the euro this year.

There is no need to rush out and buy Bordeaux 2017 “en primeur”, unless you are looking for:

1) the most popular worldwide Bordeaux “brands” which generally increase in price after their en primeur release, eg: Lynch Bages, Talbot, Beychevelle, Clerc Milon.
2) the best wines of this vintage (assuming prices are reasonable) – see my tables below and consult other press scores.
3) specific wines in different formats eg half bottles or magnums, double magnums etc.
Otherwise I would recommend you wait until either the wines are in bottle in 2 years’ time or until the euro weakens against the CHF again and you may be able to buy at slightly cheaper prices! 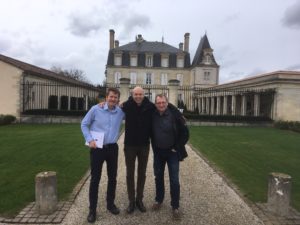