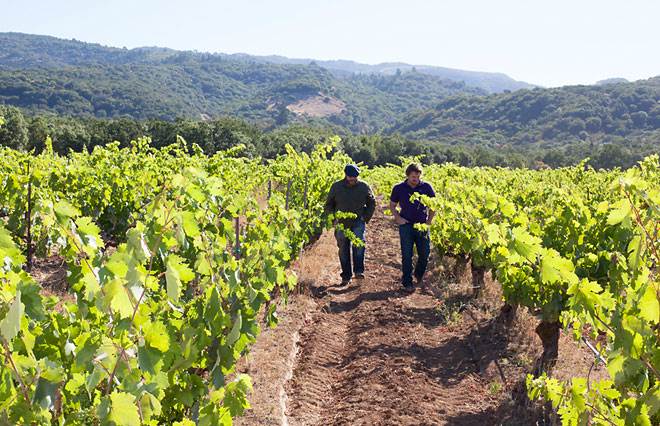 The oldest vines in Sonoma!

Morgan Peterson, son of Joel Peterson (owner of Ravenswood winery), set up Bedrock winery in 2007 with the principal goal of converting the fruit of ancient vines into powerful, elegant and distinctly Californian wines.

His focus is on making personality-packed Zinfandels and Syrahs which give a unique expression of their individual terroirs.

For Morgan, Zinfandel “needs to straddle a spot between opulence and brightness, spice, and perfume. It should be powerful but have a certain elegance”. The greatest examples “should have good weight but dance at the same time”.

To achieve this he focuses almost exclusively on ancient vines grown in great sites. He is a proponent of dry-farming, organic viticulture when possible—sustainable at the very least – picking at reasonable ripeness, the use of native yeasts, fermentation to dryness, manual punchdowns, limited racking, and a moderate dose of really good, tight-grained, French oak. With all his wines, he values perfume and dexterity over excessive ripeness. He believes deeply in achieving “balance.”

He now receives fruit from the following vineyards for Zinfandel (some go into the Sonoma Valley Old-Vine, a few will be vineyard-designated when he combination of year and quality coincide).

Morgan also loves the Syrah grape, and passionately believes that along with Zinfandel there is no better grape which is more suited to the Californian climate than Syrah.

“Syrah produces excellent, but drastically different wines from a multitude of different areas in California. It makes excellent wines from the toes of the Sierras all the way to the coastal hills of Mendocino. People do not know what they are going to get—big, fat, and rich,or perfumey, lean, and moderately austere. Unlike Napa Cabernet, where the standard of what wine should taste like is so entrenched that any aberration from the norm is nearly universally derided, Syrah comes in a complex array of forms and flavors ready to come at you like a young Sugar Ray Leonard. It keeps you guessing.

And I think this is why I love it so. It is both intellectual and hedonistic. And if one does it right the result is absolutely singular and delicious.”

The importance of ancient vines (known in California as “heirloom vines”)

When early immigrants came to California and started planting vineyards in the early-1850’s they had to rely on the vineyard even more than we do now. Now, with all of our technology— small tanks, efficient presses, pneumatic pumps, etc. we have the ability to pick varietals separately and blend a final wine. Back then, in the dusty days of horse driven ploughs and dank cellars where gravity was the only aid, the blend was concocted in the vineyard by planting different varietals in an attempt to create a balanced wine.

Almost always the predominate varietal in these “field blends” was Zinfandel. Zin is to California field blends what Grenache is to Chateauneuf-du-Pape or Sangiovese is to Tuscany; the structure of fruit and spice around which the other varietals lay deeply colored foundations and buttresses of flying aromatics. These varietals—Petite Sirah, Carignane, Mourvedre, Tempranillo, Alicante Bouschet, Valdigue’, Peloursin, Serene, Petite Bouschet, Grand Noir de la Calmette, and many others—when combined with Zinfandel create the most unique, distinctly Californian, wine there is.

These distinctive wines were nearly eradicated through the 1960’s, 70’s, and 80’s, as the focus on varietal wine caused many growers to rip out the interplanted varietals from field blended vineyards to ensure they qualified as varietal Zinfandel.

As a youth Morgan had the privilege to work with some ancient vineyards whose stubborn owners refused to pull the “others.” These vineyards, which were MAYBE, 75% Zinfandel, made wines with greater intensity, complexity, and completeness than anything else they brought in.

It is his hope to reinvent and redefine what the “truly” Californian wine is.Though Zinfandel, which is truly a unique treasure in this sun-drenched state,is part of the equation, his firm feeling is that wines with greater levels of those varietals in which our forebears placed so much faith—Pets, Carignane, Alicante, and others—truly allow a wine of distinction and greatness to come into being.

As such, he makes these wines to stand on par with the greatest blends of the world— with Chateauneuf and Chianti, with Marcel Deiss wines from Alsace, and the blends of Priorat in Spain and from the Douro and Dao in Portugal. They are meant to express their region and their vineyard—whether that is Lorenzo’s in Dry Creek or Bedrock in Sonoma Valley. Above all they are a pure expression of California most unique vinicultural asset—the ancient field blend.

Shop wine from this producer
Scroll to top